With his ongoing commitment to like-minded archivist label Finders Keepers Records, industrial music pioneer Steven Stapleton further entrusts the label to lift the veil and expose "the right tracks" from his uber-legendary and oft misinterpreted psych/prog/punk peculiarity shopping list known as The Nurse With Wound List. Following the critically lauded first instalment and it's exclusively French tracklisting both parties now combine their vinyl-vulturous penchants to bring you the next Strain Crack & Break edition which consists of twelve lesser-known German records that played a hugely important part in the initial foundations of the list which began to unfold when Stapleton was just thirteen-years-old. From the perspective of a schoolboy Amon Düül (ONE) victim, at the start of a journey that commenced before phrases like kosmische and the xeno-ignant krautrock tag had become mag hack currency, this compendium is devoid of the tropes that united what many would accurately argue to be the greatest progressive pop bands in Europe (namely CAN, Neu! and Kraftwerk) and rather shatters the ingredients across a ground zero landscape. This record includes the music that skulked behind krautrock and perhaps refused to polish its backhanded name belt. Including lesser-known artists like the late Wolfgang Dauner whose career proceeded and outlived the kosmische movement while consistently informing and outsmarting 'em whenever they got stuck in their metronomic ruts, or Fritz Müller, the man who was to Kraftwerk what Stuart Sutcliffe was to The Beatles but had more in common with Yoko and quite rightly couldn't give a shit about the Fab Four's Hamburg roots. Elsewhere there's a plethora of German bands made for German audiences as they try and shed second hand flower power Americanisms and feel the benefits of much harder drugs and the realizations of difficult second album budgets. Bonzo Cockettes show off their Big Muffs and drummers ask for extra mics while Conny Plank goes for parliamentary office and gives babies good firm handshakes for the camera. Tracks by Mr. and Mrs. Fuchs (aka Anima-Sound) who played their instruments completely naked throughout their anti-career alongside previously unpressed tracks by the scene's leading Detroit-born African American drummer Fred Braceful (Exmagma). Finders Keepers and Nurse With Wound continue to sing from the same hymnal with this ongoing collaborative attempt to officially, authentically and legally compile the best tracks from Steve's list, where many overzealous nerds have faltered (or simply, got the wrong end of the stick). Volume Two focuses exclusively on individual tracks of German origin -- the country whose music forged the prototype of the NWW inventory in the form of his secondary school vinyl want-list in the early 1970s. Features Wolfgang Dauner, My Solid Ground, Association PC, Fritz Müller, Exmagma, Anima-Sound, Tomorrow's Gift, Out Of Focus, Brainstorm, Thirsty Moon, Gomorrha, and Brainticket. 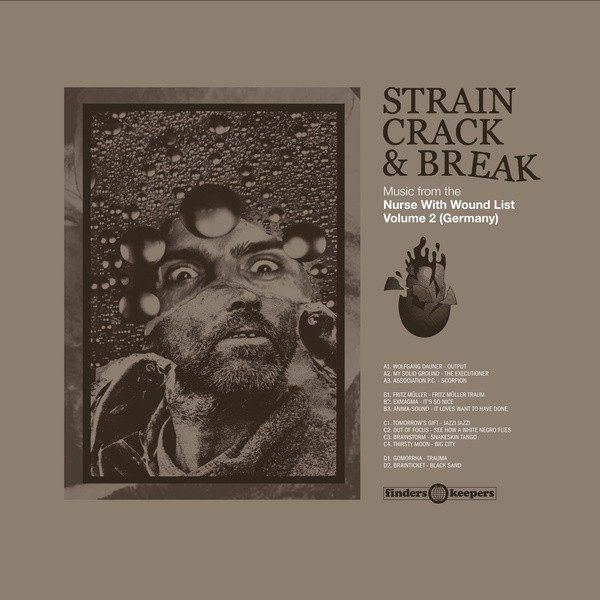 NURSE WITH WOUND: Gyllenskold Geijerstam and I at Rydbergs 2LP