Rick Wakeman is an English composer, keyboardist, songwriter, author & actor that actually needs little introduction. He is best known for being in the progressive rock band ‘YES’ and for his solo albums released in the 1970s. Rick’s early credits include playing on David Bowie’s “Space Oddity” and on songs by T.Rex, Elton John, Cat Stevens, Lou Reed and Black Sabbath (among others). Mr. Wakeman’s discography includes over 90 solo albums that range from several musical styles. To this date Rick continues to perform concerts worldwide in various capacities.

During the decades Rick Wakeman also composed numerous soundtracks and additional music for films. In 1990 this led him to compose a conceptual soundtrack for the legendary 1925 Lon Chaney silent film ‘The Phantom Of The Opera’ which was released under the moniker ‘Phantom Power’. Unfortunately ‘Phantom Power’ was cut short and was missing more than half an hour of what Rick came up with – a silent realization required non-stop music for more than 80 minutes of action – yet, thought lost for quarter of a century, the score is now back in its original expanded form.

Combining baroque moves with romantic passages, sometimes in a rock setting, Wakeman’s variations really bring back the original feel of this 1925 cinematic classic using a quasi-orchestral backdrop containing organs and harpsichord with the ghosts of Mozart and Bach lurking in the dark.

One Way Static Records is proud to present to you (for the FIRST TIME on vinyl) the complete unreleased recordings for ‘The Phantom Of The Opera’. This is the original Rick Wakeman unedited soundtrack and contains the original mixes of the songs which are different to what eventually appeared on the “Phantom Power” album. Spread over two glorious LP’s, this set contains over 80 minutes & comes with extensive sleeve notes by Tim Scott. 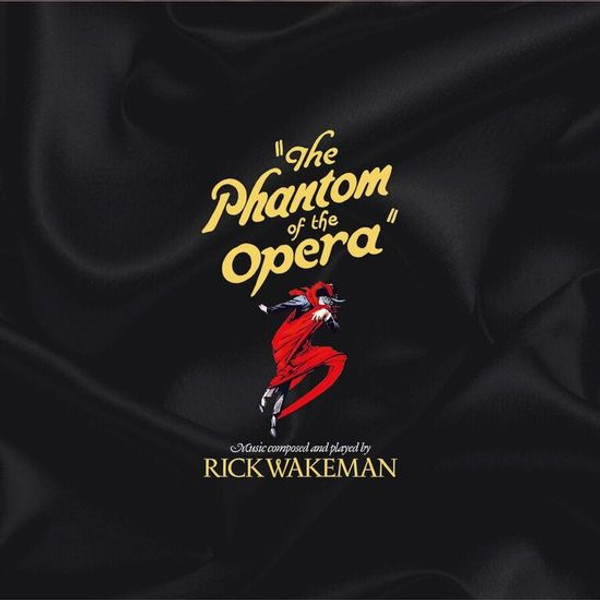 RICK WAKEMAN: The Phantom Of The Opera (Red Vinyl) 2LP