Souffle Continu Records present the first ever vinyl reissue of Philippe Maté/Daniel Vallancien, originally released in 1972. Although discrete, the career of saxophonist Philippe Maté includes nonetheless several indispensable albums: be it with the Acting Trio, Jean Guérin (Tacet), or Jef Gilson (Workshop), his collaborations in a big band or quartet with Lawrence "Butch" Morris, his presence in the Saxophone Quartet and also on the brilliant 1972 album L'Enfant Assassin Des Mouche by Jean-Claude Vannier (BMS 001CD, FKR 001X-LP). As for the man in the background: Daniel Vallancien, a sound engineer rarely featured on the sleeves; the collection Actuel on the BYG label owes much to him (he is at the controls behind Anthony Braxton, Don Cherry, Sonny Sharrock, or Steve Lacy), and the same goes for Saravah for who he notably recorded Areski, Brigitte Fontaine, Maurice Lemaître, or the Cohelmec Ensemble. Not bad for starters! What is more, Daniel Vallancien is one of a prestigious group of French recording engineers with open ears and often themselves musicians, even if only occasionally for some, including Bruno Menny, Daniel Deshays, or Jean-Marc Foussat, who have all recorded remarkable albums as leaders. Behind this collaboration was the idea of creating music which was free, direct, and spontaneous, while having also a minimum of advance planning. Music, according to the brief liner notes desirous to "remove itself from long and patient laboratory experiments". So, there can be found here none of the sophisticated tools associated with electroacoustic research, but mainly a recording mixer console, which, in the hands of Daniel Vallancien acts directly on the original instrumental sound in real time, modifying and multiplying it while respecting the natural flow. Be it Paul Méfano, Betsy Jolas, Gérard Grisey, or Jacques Lejeune, many contemporary composers working in France have, at one time or another, included the saxophone in their work. Nothing can compare to the singularity of the dialogue between Philippe Maté and Daniel Vallancien, which they themselves describe as being "serious, sarcastic or humorous", with, here and there, "disturbing sounds". Words, however, even those used by the protagonists themselves, are insufficient to describe such a sonic object, difficult to identify and, it has to be said, extraordinary. Licensed from Saravah. Gatefold sleeve; Obi strip Edition of 500. 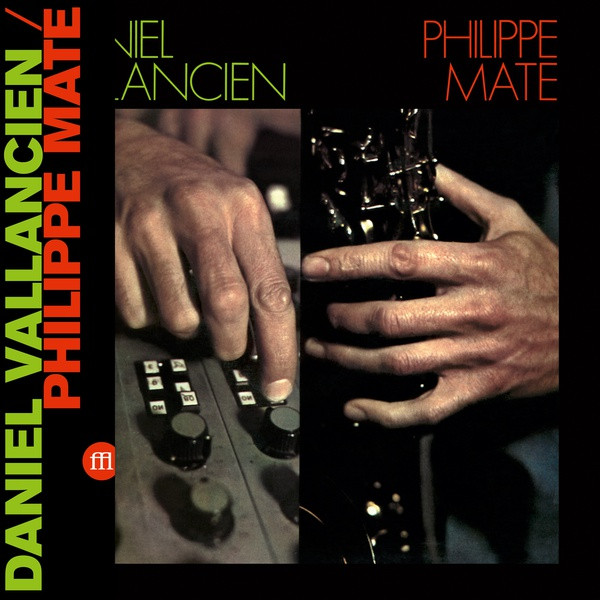