Includes eight-page booklet; 180 gram vinyl. Reissue, originally released in 1971. Before Mahjun -- with the two albums released by Saravah, reissued by Souffle Continu in 2016 (FFL 022LP, FFL 023LP) -- there was... Maajun. Five musicians (Jean-Pierre Arnoux, Cyril and Jean-Louis Lefebvre, Alain Roux, and Roger Scaglia) and three times as many instruments at the service of an electric-poetic guerrilla group molded from folk and blues. The group's unique album, Vivre la Mort du Vieux Monde evokes an (imaginary) association of Frank Zappa and Jacques Higelin, of Sonny Sharrock and the Art Ensemble Of Chicago. Under these conditions, Long Live Death! "The most French of all the French groups, determined to take Maurice Chevalier's place in American hearts." This was how Rock&Folk presented Mahjun in 1977. So be it. But when "Vivre la Mort du Vieux Monde", was issued, it was 1971, and the name, though the same group, was still spelled Maajun. At the end of the sixties, five blues fans decided to form a French group ready to break down the barriers: Jean-Pierre Arnoux (drums, vibraphone, saxophone), Cyril Lefebvre (guitar, organ), Jean-Louis Lefebvre (bass, violin, guitar, vocals), Alain Roux (saxophone, flute, harmonica, vocals) and Roger Scaglia (guitar, vocals). This was Maajun, and Vivre la Mort du Vieux Monde would be their only album, but which would (nevertheless) be followed by those of Mahjun created later by Lefebvre (Jean-Louis) and Arnoux. Recorded for the Vogue label, Vivre la Mort du Vieux Monde would disturb a number of people. This is mostly due to the lyrics, many of which were written by Gérald Escot-Bocanegra, who, while summoning the spirit of Lautréamont and Rimbaud, turned the Maajun musicians on to rock and free jazz. Add a bit of politics into the mix, and the release of the album was delayed for several months. But then, wasn't it worth waiting for? Because Vivre la Mort du Vieux Monde, a real concept-album, is an important and iconoclastic statement made directly in the face of (francophone) dreamers of all countries. Over heavy guitar riffs, psychedelic interludes or fantasy-fueled digressions, Maajun built mazes on the advice of alchemists known only to themselves before heading off on a long march on the "cracking walls". Licensed from Maajun. Carefully remastered and restored by Gilles Laujol. Graphic design by Stefan Thanneur. Includes liner notes by Ian Thompson and rare photos. 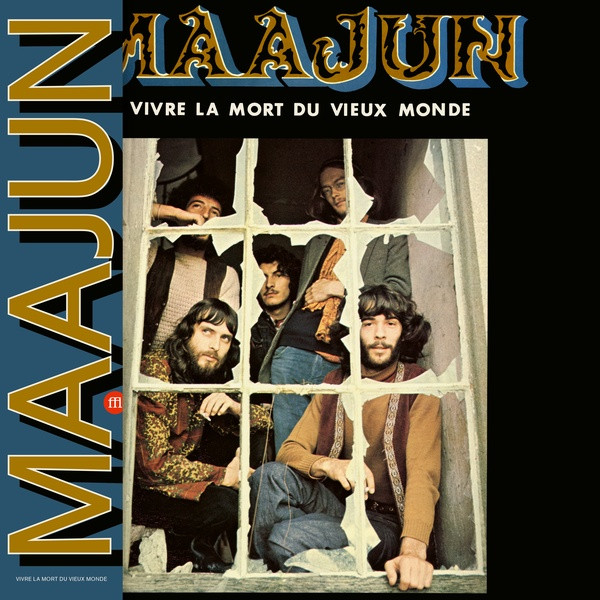