At the time of the film's release only a 45rpm single of this original soundtrack was issued which contained the song "Can Be Done", with lyrics by Sergio Bardotti and sung by Rocky Roberts (in 1966, Luis Bacalov had already collaborated with Roberts, performer of the main theme from the highly successful 2012 western movie Django). Only in 1995, Point Records released a CD which contained the instrumental score coupled with the OST from Il Grande Duello. For this issue, Digitmovies' new digitally restored and remastered record, the label had access to the mono master tapes of the recording session which gave them the chance to discover some unreleased takes which we have assembled in a nearly eight-minute suite. In addition, a special bonus track features the very rare stereo-mixed version of the original 45rpm single song. Luis Bacalov succeeds in representing in his music the whole sentimental side of the plot (the friendship between the corpulent, but good-hearted Thompson and the child Chip) by writing a sweet and cheerful main theme that is introduced in the opening credits in a pop key and with a little Bacharach flavor called "Can Be Done", sung by Rocky Roberts and accompanied by a children's choir. This theme is reprised with orchestral variations sometimes dramatically, sometimes in an epic western context with the use of the harmonica of the great Franco De Gemini and alternated with saloon as well as instrumental and choir folk music. This CD is dedicated to all the fans of the mythic Bud Spencer, of the Italian Western, and the music art of the Academy Award winner Luis Bacalov. 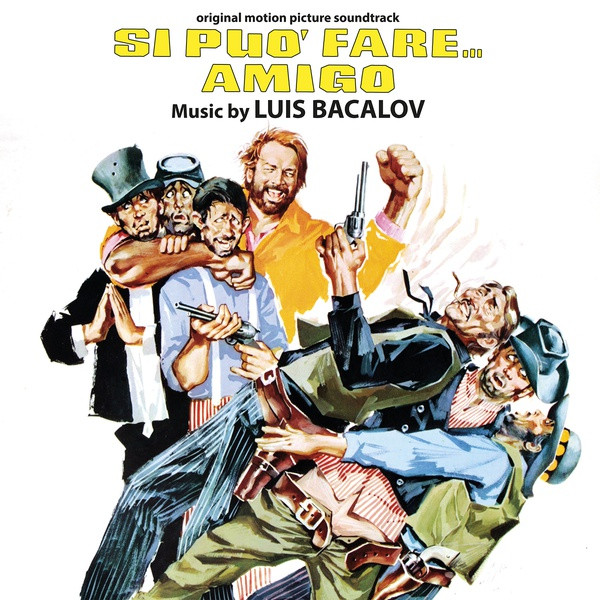