Efrim Manuel Menuck — founding member of Godspeed You! Black Emperor and Thee Silver Mt. Zion — and Kevin Doria from Growing and Total Life, are now officially a duo. Menuck recruited Doria to help him translate his acclaimed 2018 album Pissing Stars from the studio to the stage, and the pair have been touring under the Efrim Manuel Menuck moniker for the pastyear (often with Doria’s latest solo project KGD opening the proceedings). They’ve also been co-writing piles of new material, diving deeper into whirling maximalist electronics,still shot through with Menuck’s incantatory singing awash in plaintive distortion and hope.

Efrim Manuel Menuck & Kevin Doria are SING SINCK, SING presents the first volume of songs forged from this febrile and fertile merger: an antifa poetics of sound that unspools across five crushing, keening tracks driven by thick sweeping drones and ostinatos, battered by inscrutably searching, ricocheting vocals. Anguish,yearning, and desperate conviction combine in these saturated survivalist electro-hymns, for as long as the power stays on to overload the amplifiers.

WE STARTED PLAYING TOGETHER IN THE DARK WINTER OF 2017. 6 OSCILLATORS AND 3 LARGE AMPLIFIERS. DROVE THRU HELLA BLIZZARDS AND/OR HEATWAVES JUST TO LAND IN SMALL ROOMS, VIBRATING. A SERIES OF SHORT TOURS, A PROCESS OF FIGURING OUT WHILE EXHAUSTED WHILE HURTLING WHILE WORRIED. EVERYTHING ILLUMINATED EVERYTHING DESTROYED. WE LANDED IN MEXICO CITY LASTFALL,WROTE THIS RECORD QUICKLY WHILE THE POLICE DROVE ROUND AND ROUND. FIRST SONG IS SELF-EXPLANATORY. 2ND SONG A STATEMENT OF INTENT. THIRD SONG IS AN EMPTY SPACE BETWEEN TWO HIGHWAYS.FOURTH SONG IS ABOUT A MURDERED FOREST. FIFTH SONG INSISTS THAT WE WILL WIN. HOLD ON.THO THESE TIMES ARE DARK TIMES. HOLD ON. – E.M.M./K.G.D (SING, SINCK SING)

As the title suggests this is also an interstitial album of sorts, an identity-bridge that leads away from Menuck as ‘solo’ artist and towards SING, SINCK SING which will be the new band name for future work by the duo.

A1. Do The Police Embrace?
A2. Fight The Good Fight
B1. A Humming Void An Emptied Place
B2. Joy Is On Her Mount And Death Is At Her Side
B3. We Will 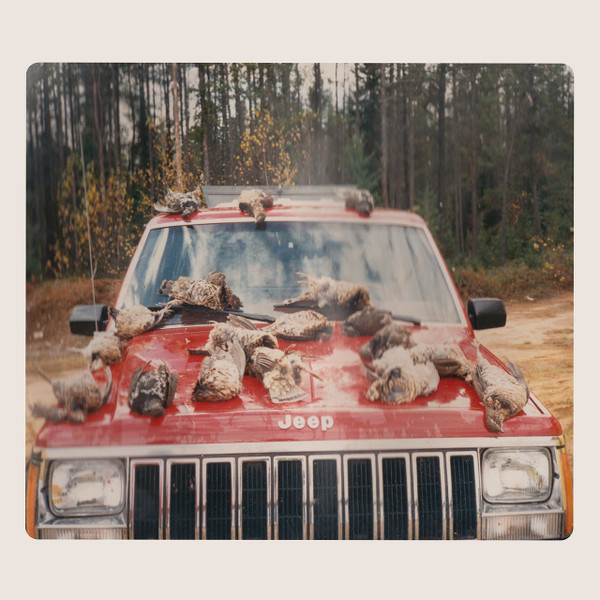 JULEE CRUISE & KING DUDE: Sing Each Other's Songs For You 7"