Dragon’s Domain Records presents the original motion picture soundtrack for THE RETURN OF SWAMP THING, featuring music composed by Chuck Cirino for the 1989 sequel to SWAMP THING, directed by Jim Wynorski, Dick Durock, Heather Locklear, Sarah Douglas, Joey Seagal, Ace Mask, Monique Gabrielle and the great Louis Jourdan. THE RETURN OF SWAMP THING continues the longtime collaboration between filmmaker Jim Wynorski and composer Chuck Cirino, which includes films such as CHOPPING MALL, DEATHSTALKER II, NOT OF THIS EARTH, TRANSYLVANIA TWIST, A DOGGONE CHRISTMAS, A DOGGONE HOLLYWOOD and, most recently, A DOGGONE ADVENTURE.
Following the cult success of the original SWAMP THING released in 1982 and directed by Wes Craven, the producers Benjamin Melniker and Michael Uslan decided to make a sequel, and ordered up a script from screenwriters Neil Cuthbert (later, Hocus Pocus, Mystery Men) and Grant Morris (later, Dead Dog). They offered the directing assignment to Jim Wynorski, then four movies along in his prolific career of more than 150 films. Actor/stuntman Dick Durock returned as scientist Alec Holland’s alter ego Swamp Thing, Louis Jourdan as the villainous Arcane, still eager to steal Alec Holland’s chemical advances, Heather Locklear (TV’s MELROSE PLACE, FIRESTARTER), came in as Arcane’s niece Abby, a character from the comic book. Sarah Douglas (Ursa from SUPERMAN and SUPERMAN II) co-starred as Dr. Lana Zurrell, assistant to Arcane in his attempts to combine human genes from various swamp animals to create an army of monsters known as “Un-Men.

When it came to music, Wynorski brought in his friend, composer Chuck Cirino, who had begun scoring all of Wynorski’s films since 1986. Their passionate mutual interest in Italian composer Ennio Morricone brought them together in the mid-1970s and their friendship was strengthened when both wound up in Los Angeles shortly after STAR WARS was released. By the time Wynorski began directing, Cirino had gotten into writing music as well as directing and editing.

When they came to collaborate on THE RETURN OF SWAMP THING, the film’s budget was sufficient enough to accommodate a few live instruments in addition to Cirino’s electronic set-up, including a small brass section containing flugelhorns and trumpets, a recorder soloist, and an Electric Valve Instrument player. Everything else was synth. Remarkably, The score was recorded in a cramped and complicated set-up in the bedroom of Cirino’s Van Nuys home. There are actually two scores to THE RETURN OF SWAMP THING; well, one and a half scores to be precise. One is present in the film and occupies the majority of this complete score album. The second can be heard in the 22-minute suite that concludes the track list. Cirino’s score for THE RETURN OF SWAMP THING is full of exciting thematic material and fans of the composer have been long anticipating its release.

Chuck Cirino did not start his career as a composer, but rather as a programmer in Stroudsburg, Pennsylvania for a Public Access cable TV station, where he learned how to create TV shows by himself, without a crew. In his spare time, he experimented with the station’s video equipment and created a series of genre productions that allowed him the opportunity to learn how to incorporate special effects into his work. After relocating to California, Cirino transitioned into directing high-end special effects television commercials. His first work as composer was for the 1980 cult film GYPSY ANGELS, which starred Vanna White and Richard Roundtree. Since then he has scored films for Roger Corman, directed music videos for bands like Earth, Wind & Fire and The Dickies’ KILLER KLOWNS FROM OUTER SPACE, and has recorded over 40 music soundtracks for feature films including SORCERESS, HARD TO DIE, TRANSYLVANIA TWIST, and many others. Most recently, he has scored A DOGGONE CHRISTMAS, A DOGGONE HOLLYWOOD and A DOGGONE ADVENTURE.

Dragon’s Domain Records is excited to bring THE RETURN OF SWAMP THING to compact disc for the first time, mastered by James Nelson at Digital Outland with exclusive liner notes by author Randall Larson, with the participation of the composer and the director. 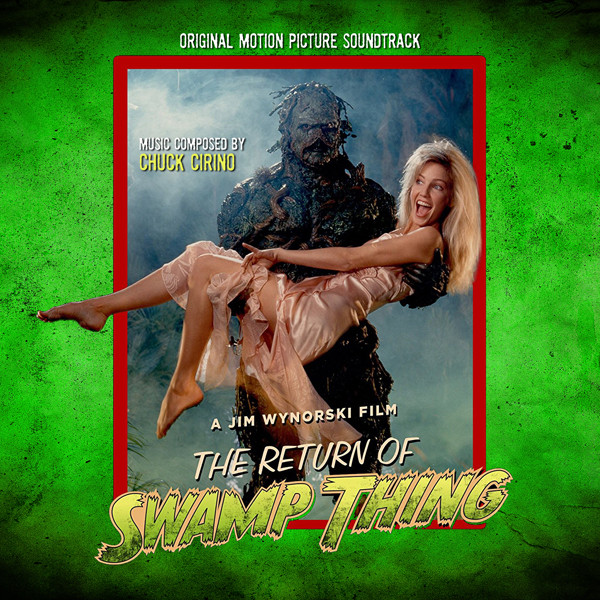