There's a devious religious sect underneath the Tower Of London which consists of some of the most greedy and powerful men and women in the world! The plot of this obscure Soho-based German thriller perhaps feels more believable during today's political climate than it did when it was released back in 1966, taking diehard fans of Edgar Wallace paperback adaptations on a slightly more macabre and mystical journey than they had come to expect. What is perhaps less believable is the almost "criminal" fact that this films unheard spooked-out jazz score by one of the most innovative European players and composers has spent almost fifty-five years locked away. For those who thought soundtracks and conceptual cinematic records like Mad Monster Party and The Vampires Of Dartmoore were unrivalled in there phantasmagorical micro-genres, well the time has come for the original "jazz electronicien" Bruno Spoerri and the Finders Keepers archivists to unleash thick plodding bass lines, mind-bending percussion effects, wayward electric organs and breakneck European jazz to the loneliest part of your record library. Encapsulated in the unbroken chains of baritonal chants by mystical mad monks during cloaked underground ceremonies while the life-blood of some of the most important and coveted players of the Swiss, French and German jazz scenes perform outlandish musical exchanges under Dr. Spoerri's watchful eye Der Wurger vom Tower delivers on a rare conceptual brief marking a truly unique moment in their combined careers. Having finally been liberated from Bruno Spoerri's meticulous master tape vault this music takes you to the furthest reaches spanning right back to his first-ever feature-length soundtrack commission in order to find its place alongside other recently resuscitated oblique jazz scores by the likes of Basil Kirchin, Krzysztof Komeda, Angelo Michajlov, Roger Webb, and Jonny Scott. For an established jazz composer like Spoerri, who would quickly gravitate towards the rise of electronic music to become one of its biggest champions and pioneers, it is easy to identify within this score the early murmurs of minimal electronic sound design and bizarre jarring keyboard motifs which wouldn't sound out of place in recordings by Sun Ra if you can imagine an unlikely recording session with the John Barry Seven. Heinz Pfenninger's thick plodding bass notes (complete with double tracking and spring reverbs) embody the classic Bert Kaempfer. and Tony Fisher's wet bass sound, successfully pinning down the sodden plot against the damp underground canals of '60s London in conjunction with legendary Swiss jazz drummer Rolf Banninger as the rhythm sections unwittingly channels McCallum and Axelrod in the dark shadows. 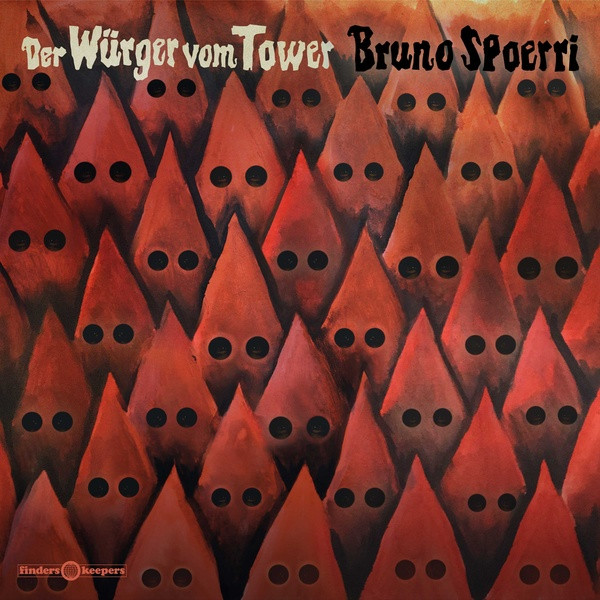